Last Friday; 15th August, in Malta we celebrated the feast of Santa Maria or the assumption of our lady. This is the most beloved public holiday by the Maltese. It is celebrated in many villages around the island with processions, marching bands, food and colourful fireworks. This feast is of great significance because during World War II there was a great shortage of supplies in Malta. All merchant ships that tried reaching Malta were sunk by German and Italian bombers. The Maltese were losing hope and they suffered greatly at the time. Supplies were sent on 14 merchant ships and this plan was called Operation Pedestal. The most important ship was the SS Ohio being the only large tanker available. On the 13th August the MV Melbourne Star and the MV Port Chalmers entered the port followed by the Brisbane star the following day which had its bow torn off by a torpedo. However, the SS. OHIO was needed for Malta to be able to carry on.  On the 15th August 1942 the severely damaged SS. Ohio arrived into the Grand Harbour saving the Maltese. The tanker sank as the last of the fuel was transported off. This event is seen by some as a miracle and the feast of Santa Maria became even more popular and loved.  Here is a picture of the SS. Ohio being towed into the Grand Harbour. 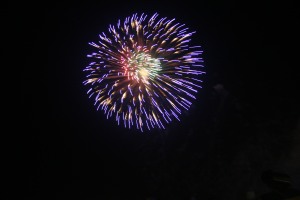 Remember I mentioned a BBQ earlier? So for the BBQ I decided to make some pork ribs with BBQ sauce. I love anything covered in BBQ sauce! The first time I had BBQ sauce was when I went on holiday to Florida aged 10-11. My sister and I got addicted to it and ate a variety of meat cooked in BBQ sauce for the two weeks we stayed there and demanded more once back home. We used to buy BBQ sauce ready made at the supermarket but now this is no longer an option since all contain garlic and onions and quite possibly also glucose-fructose syrup. You really  don’t realise how common these are in food products until you’re intolerant to them. Since I had no other choice I decided to try to make my own BBQ sauce and I was quite pleased with the result!

*For the BBQ sauce:

**You can find these in the ethnic section in the supermarket either in the Asian or Indian section Method:

Here’s a picture of the BBQ ribs. 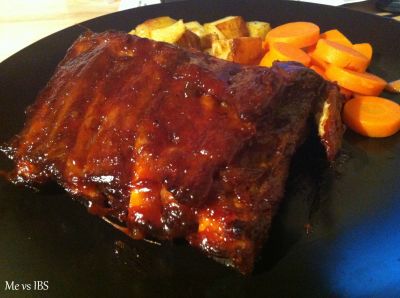 At BBQs we always serve some appetizers to nibble on while setting up the fire and cooking. These usually include dips, cheese and olives. These are often accompanied by wheat crackers. I had mine with some salted corn nachos and crunchy carrot chips instead. I recently discovered bags of crunchy carrot chips at the supermarket and they’re absolutely gorgeous. They come in two flavours paprika or cinnamon and cardamom. The crunchy paprika chips were great with some cheddar cheese. These crunchy carrot chips are also ideal to snack on. I had my cinnamon and cardamom carrot chips dipped in some almond butter as a snack yesterday. Perfection! These have quickly become a favourite. One bag is made from 300g of carrot. Carrots are low FODMAP however Monash only gives information that they are low FODMAP up to 61g and should be tolerated by most. I’ve had no issues with these carrot chips but I’m giving you a heads up just in case since it contains huge amounts of carrot. These are the chips..

One thought on “BBQ ribs and sauce – low FODMAP”